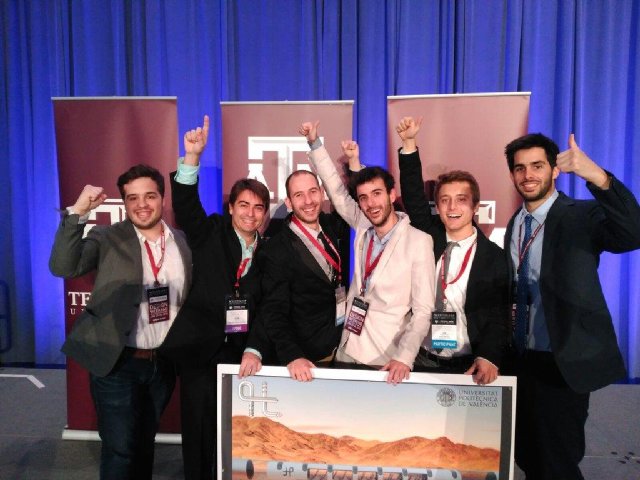 The spanish team from Valencia was awarded with the Top Design Concept and the Propulsion/Compression Subsystem Technical Excellence Awards. Their rail-free solution could save up to 30% in construction costs of the Hyperloop tube. The team of five students was competing against teams of more than 40 students. Their novel levitation system works by attraction to the top of the tube, not with air bearings. They got the highest number of prizes per student and team.

Makers UPV Team are Ángel Benedicto, Daniel Orient, David Pistoni, Germán Torres and Juan Vicén. These five university students, founders of a maker community in their hometown, started by building 3D printers and drones to learn something new by themselves. “We needed something more practical, so we decided to start a movement”, they say. Now they have designed the future of world’s transportation.

“Sometimes people underestimate their potential. Don’t do it! The world needs more dreamers.”. In their case, they all love challenges, so when they heard about the possibility to participate in such a unique contest, despite the fact of being only five and having exams inbetween, they agreed: “Why not making it? Let’s teach the world a lesson: it’s all about quality, not about quantity”.

And they succeeded. After a 19-hour-long journey from the other side of the Atlantic, two presentations carried out on Friday and Saturday determined the winners of the competition. Among them, in the building category, the MIT won the first prize with their simple but effective and robust design. “A big University had to win in that category. They have lots of resources and very bright minds working almost full time”.

But when it came to the Design Concept, Makers UPV had a big competitive advantage. “We didn’t have so many restrictions as the teams in “Building”, so we were able to come up with a completely new idea that fits better with Musk’s idea of hypervelocity.”

“It’s transportation. It’s attraction. It’s future”. that’s how their slogan sounds. The team was able to develop a design that levitates through attraction of the pod to the top of the tube instead of the typical air bearing configuration, which was seen in almost all teams. This way, the layout of the tube could avoid the use of rails, which are about 30% ($188M) of the construction costs. “We designed a new configuration of levitation units that maximize energy efficiency as well as allowing a high degree of scalability.”

The propulsion system was similar to that of an airplane engine, with a compression-expansion cycle, without the need of storing air tanks inside the pod. A reliable braking system and safety measures were also designed to obtain a “fault-tolerant system”.

After this amazing experience, they come back home with two trophies signed by Elon Musk. “This is not the end. We are only five people which is not enough for building, but if we capture the attention of SpaceX and we obtain enough resources, this could become a reality.”

All said, they hope that with this award spanish government will notice that supporting motivated students doesn’t only mean providing them with economic resources: “What we want is a flexible university system that gives students like us more freedom to participate in events that generate value. For example, we had exams before and during the contest and it was very difficult to find a way to postpone them. Sometimes one has the impression that there was no midpoint: either you study or you participate in the contest. In the case of an elite athlete this would have been much easier.”

“Last but not least, we want to thank Vicente Dolz, our advisor, who was involved from the beginning in the project. Also to Universitat Politécnica de Valencia, ETSID Engineering School of Design, Generación Espontánea and Maria Vivancos that firmly believed in our project. And of course, to everybody who helped us during these intense months:

Demetrio Muñoz, Paco Presencia, Pepe Vicén. Thank you all from the bottom of our hearts.”

Anyway, they made it. So congratulations and we’ll keep you informed whenever we know more about their project.